Point-to-Point Model railroading... It was both straight-forward and and pain-in-the-ass to set up multiple point-to-point shelf runs.

Bachmann sells a point-to-point auto reverseing system. A DC system of course. I don't really need the complexity or power of a DCC system right now, and setting up an automated DCC point to point system seems even less trivial then a DC system.

I bought the bachman system on the assumption that I could rewire it, and NOT use their custom/propritary/expensive "auto reverse" track. And this proved to be true. 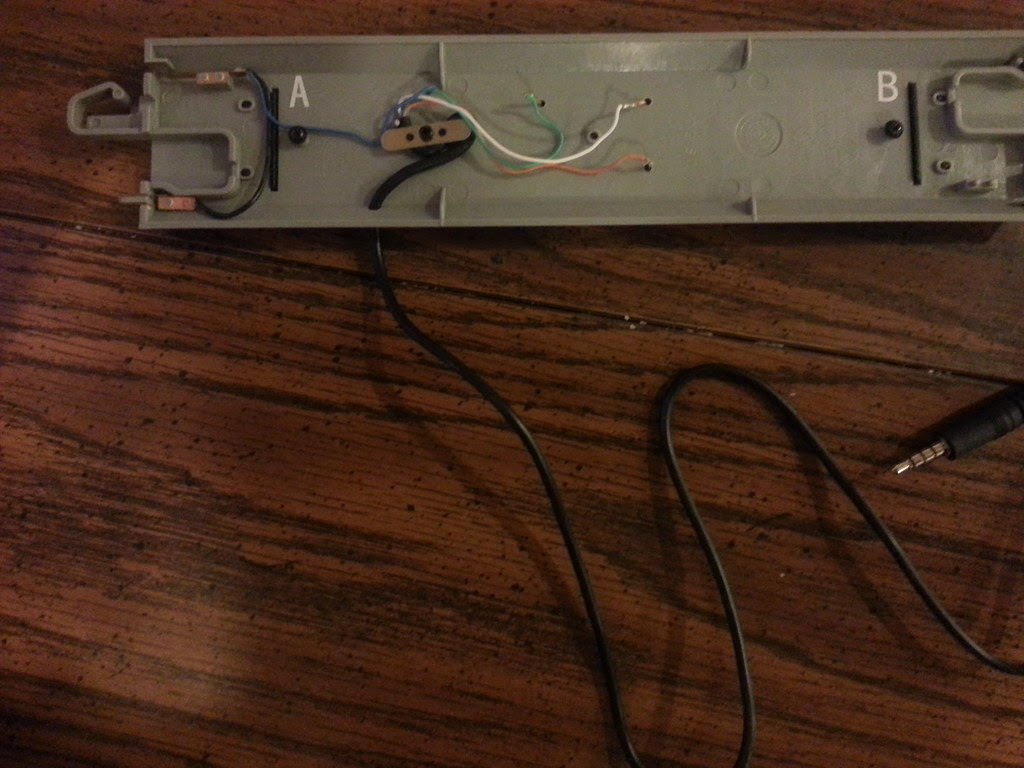 Power from auto-reversing power/throttle comes in on a mini-plug. 4 wires coming out of that as follows:
White and Orange to the North and South Rail, respectively. I am assuming this is what powers the track

Green: Green Goes into the "North" track... This point seems to be where the train stops/reverses when POWERED engine crosses it. When an Un-powered car

crosses this point, nothing happens.

Blue: Blue is wired to BOTH of the prongs on the A side... Two separate under track output joints... but its the same wire going to both. prongs:

Here's what the End and Middle pieces looks like: 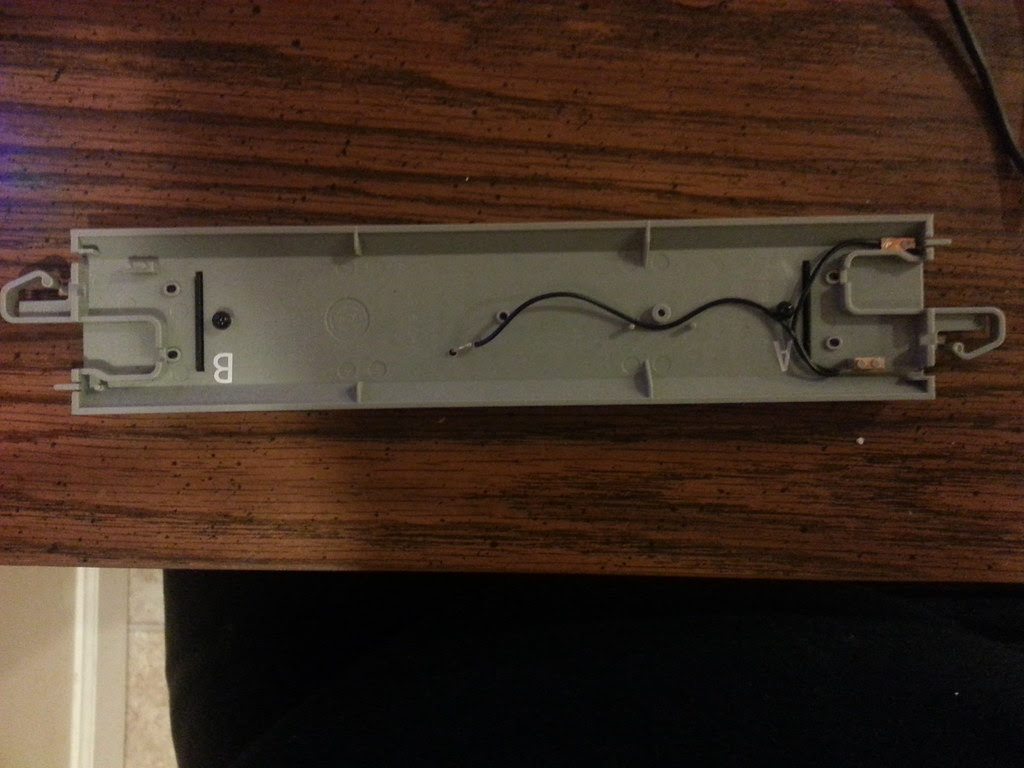 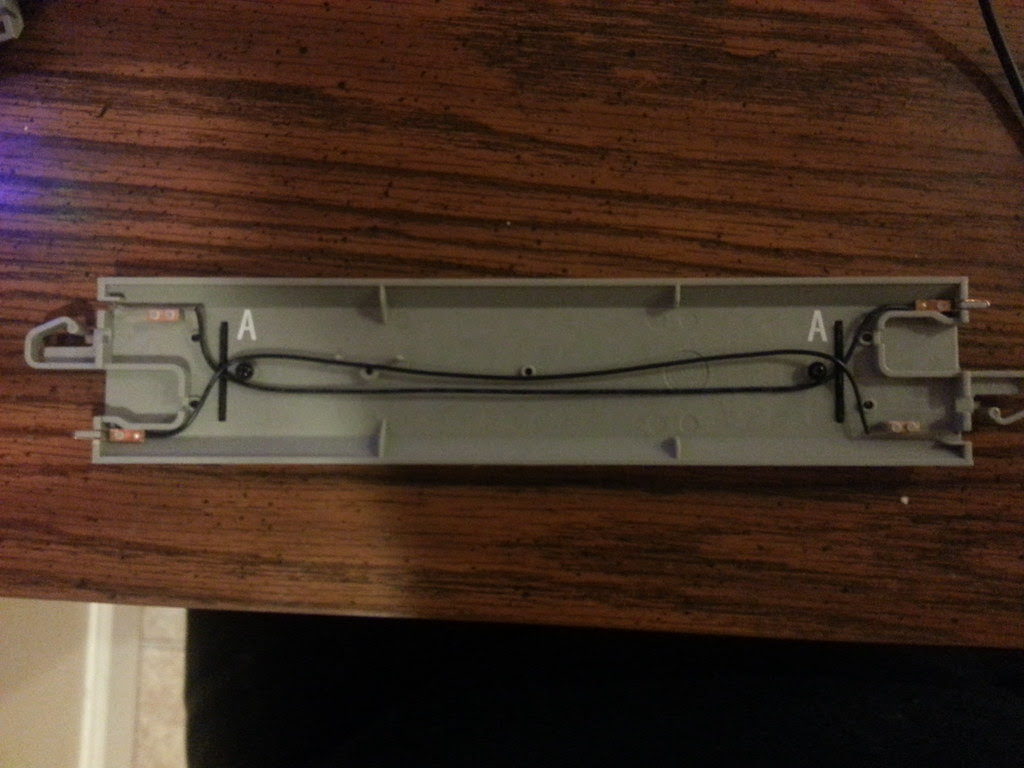 Both incoming wires on the north and south prong are wired together, and sent to the South Rail. It is at this point that the train stops/reverses when the powered wheel hits it.

Some thoughts:
The middle track wiring is entirely redundant... Its a safe and foolproof way to ensure the blue wire gets sent all the way to the end track, creating the stopping point.

From a hack-ability standpoint, you could leave all those middle tracks unwired (IE regular EZ track), as long as you ran a single wire from one of the A side prongs on the Start piece, to the a side prong on the end piece. Alternately, the blue wire can be run to whatever end piece track you want, as long as its soldered to the opposite rail that the green

wire is soldered to.

My Cal Train point-to-point system uses a set up I discovered by haunting Ebay. it involves a standard DC power pack, and a Peerless 525 controller block 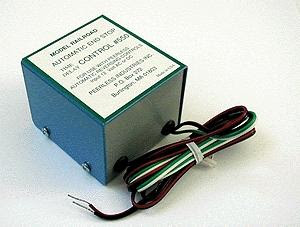 and a bit of wiring that resembles the "detect the short circuit /switch the polarity" action of the Bachmann system. Currently the end points reverse instantly. I have to add another module to create pauses at the ends of the line, and a third module if I want to add station stops in the middle of the line.  At this point, I'm just assuming my Cal Train tech-workes are doing combat drops at each train stop...   The herky-jerky reverse of direction sometimes results in a decoupling when the train is in push mode, but another transit of the line usually causes a recouple without any derailments or problems. One of my Cal Train bombardier cars is running on non-standard trucks, and the height difference in couplers is causing this.  To be fixed at some point when I care enough to blow $30 on replacement trucks.

A side benefit of those non standard trucks is that they allow the consist to make it around the 18 inch curve without derailing. 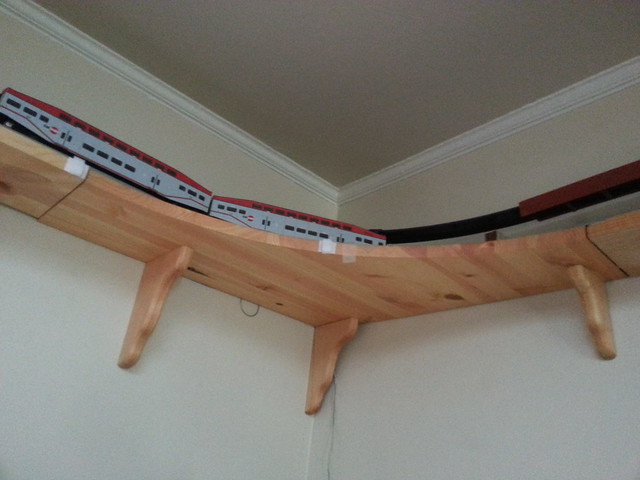 When the train is in push mode, the engine's rear rails actually rub against the bombardier car and the standard trucks don't have any kind of "give," which results in them being pulled off the track. The mushy fix-up-trucks I installed on a broken ebay-score allowed the bumping between bombadier car and engine railing without causing a derailment.... as long as the train is traveling slow enough. A long term solution is to install an extra long coupler on the lead bombardier car, and on the engine, so they don't rub against each other in push mode, while rounding the sole corner in the run.

My Muni run is currently decommissioned until I can rewire it to a second Peerless block, and I will be experimenting with using the same power supply to power two separate peerless control blocks. I'll let you know if I burn the house down..

I've been haunting Ebay for Giants train-cars, and have added two additional dome cars, and a flat car (sans trophy) to my train since its inception. I've also been looking into lighting up the dome cars... More to come on that, as well as coverage of my re-lighting and re-powering my previously mentioned Boeing LRV, which sounded like a blender set to puree when it ran. 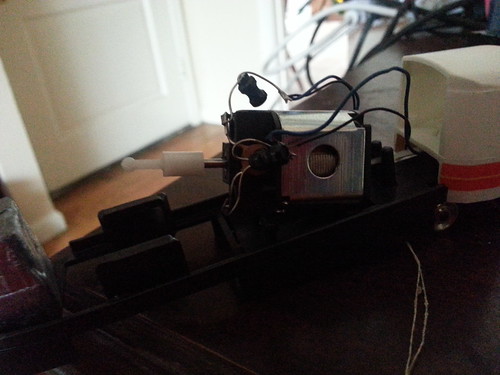 A Third Line, With Elevation...

So... the thing that was bugging me was this:  If I wanted to go all the way around the room, I had a height discrepancy.  I initially set the height based on the height of the door frames, and the assumption that having the train as close to eye level as possible was the way to go.

But... but... the windows along the front of the living room had some shelving and window treatments that were about 3 inches HIGHER than my train shelf. If I wanted to close the circuit as it were, I would need to raise the height of my existing shelves... Or.... Or...

I settled on a less intrusive, more gradual approach to tackling this issue.  Bachmann makes some EZ track risers that would allow me to gain the elevation needed...  I had enough of a run to keep the rise at a modest 2% or so....  and you know... If I'm going to have an elevated track along the back edge of my shelf as it approached the chimney, it wouldn't be that much work to create an elvated viaduct that allowed for a Cal Train line to run beneath my Giants Train Line.

to go with my 4 cal train bombadier cars.  I mean, someone just sent them to me. I wouldn't actually be buying trains for a layout that couldn't accommodate them. Okay... I mean... I guess I would.  But come on. A full Cal Train push/pull consist, next to my Giants train line?  That's too good to pass up! And a good fit since the San Francisco terminus of the Cal train comes in a block away from the Giants' AT&T park.

Sooooo.... anywhoooooo.... A viaduct. I like the idea of doing something cheap and DIY, but something that would look good when seen from a distance.... I bought some balsa wood  "beams", and coffe-stir-stick "girders" and "cross-members," and begin engineering 36-inch-long viaduct sections that would take the bachmann EZ track, as well as a coat of paint of rust-red industrial colored paint...  I've played around with various types of support beam strutucers.... and now have 12 feet of viaduct running halfway down the wall. Once I settle on a final support structures, I'll complete the run to the chimney. Until then...

Behold... my Giant Train Of Doom, with elevated viaduct and Cal Train consist running beneath it...

Soon, I will be ready to "cross the Chimney" and try for a long run above the windows.... we'll see. That would seem to require some kind of signature bridge of some sort....  A signature bridge...  36 inches long...
Posted by jlassen72 at 4:33 PM No comments:

It All Started Innocently Enough...

One day, during the long off season between the end of the 2013 baseball season, and the beginning of the 2014 season, Google threw up a add for one of those cheesy Hawthorn village sports-themed trains. 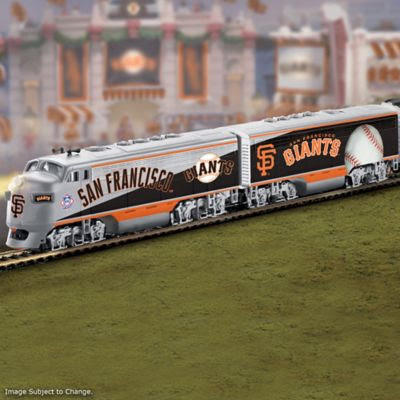 I had a vision of the Giants train, sitting at rest on a shelf , above the wall of giants memorabilia in my living room. Something simple. No big deal. The train arrived and I built a shelf along the top edge of the "memorabilia wall" in the living room, with the train sitting on the track. Silently. Unmoving.

But as time went by, and I began wondering... wouldn't it be nice if the train moved? so I bought one of those Bachmann point-to-point auto reverse kits, so it could run back and forth. It was a nice start...  but that was kind of sad, because... well, there just wasn't very far for it to go. A short trip sort of flies in the face of train mythology and imagery. Trains were built to cross continents!

So I decided to extend the track along another wall... just above my wife's desk.  She wouldn't mind... I mean... I had to lower her bulletin board a few inches, but I don't think she noticed. And I had to come up with a clean and easy way to add a corner shelf with an 18 inch radius concave curve at the corner. And while I was at it... I mean, I wasn't PLANNING on adding a third wall, but I could ad a matching curved shelf in the far corner so I could, you know... if I wanted to...  maybe someday... add a third shelf-run down the long living room wall, above the turtle-tank and couch, all the way to the fire place chimney...

After the train was up and running, I realized I needed more room for my bobble heads. No problem. My shelf on the memorabilia wall was initially designed to accommodate 2 tracks... but I could simply have one track, with bobble heads behind it. The second shelf above my wife's desk was extra deep. It could hide wiring, and serve as a train yard of sorts for the assorted rolling stock that random people on ebay kept sending me. I have no idea why that kept happening. It's not like I was randomly buying rolling stock that modeled railroad companies I remember from my youth. Okay... well. it was exactly like that.  But that's sort of an ancillary issue to my Giant Shelf Train of Doom. So never mind.


Eventually I couldn't restrain myself. My railroad had to grow.  House guests kept asking if I was going to go all the way around the room.  That seemed out of reach, and like it would exceed the tolarence levels of my wife... but a shelf that ran all the way down the long wall, to the fireplace?  That seemed simple enough. I had to order more shelf brackets, and piece together a few more pine shelf boards, but eventually that spurr on my railorad was complete. 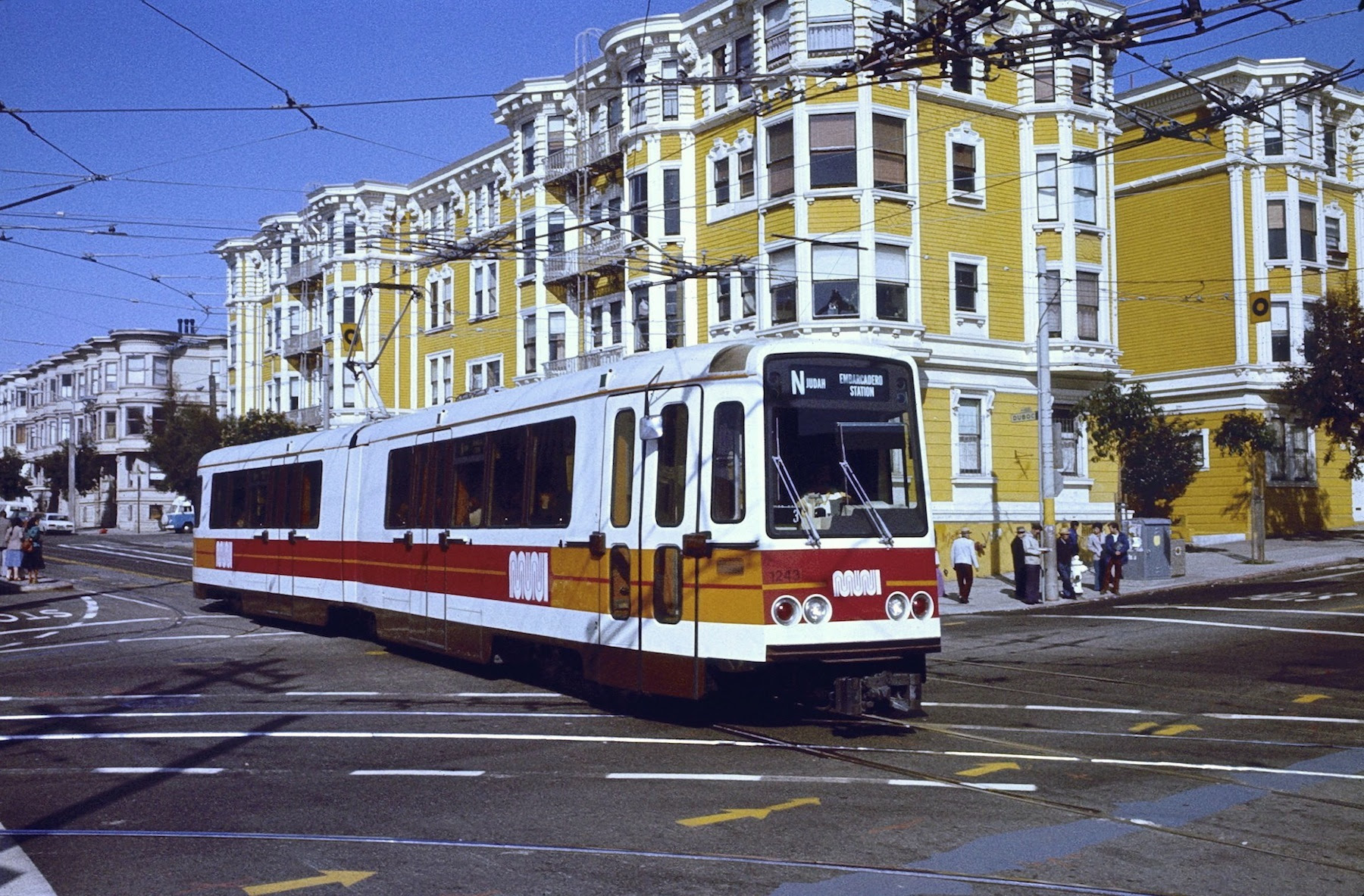 During the construction of the track shelf, I found myself obsessing over various trains native to San Francisco, and I had aquired a MUNI LRV. A Boeing LRV to be precicse. Supposedly those Boeing LRV's that MUNI bought were legendary.  In a bad way. But they were a piece of "San Francisco." These LRV's had been in the process of being replaced when I first moved to San Francisco in the late 90's, so I associated them with my initial years in San Francisco.  Apparently, my wife did too, because she said "I like that one." 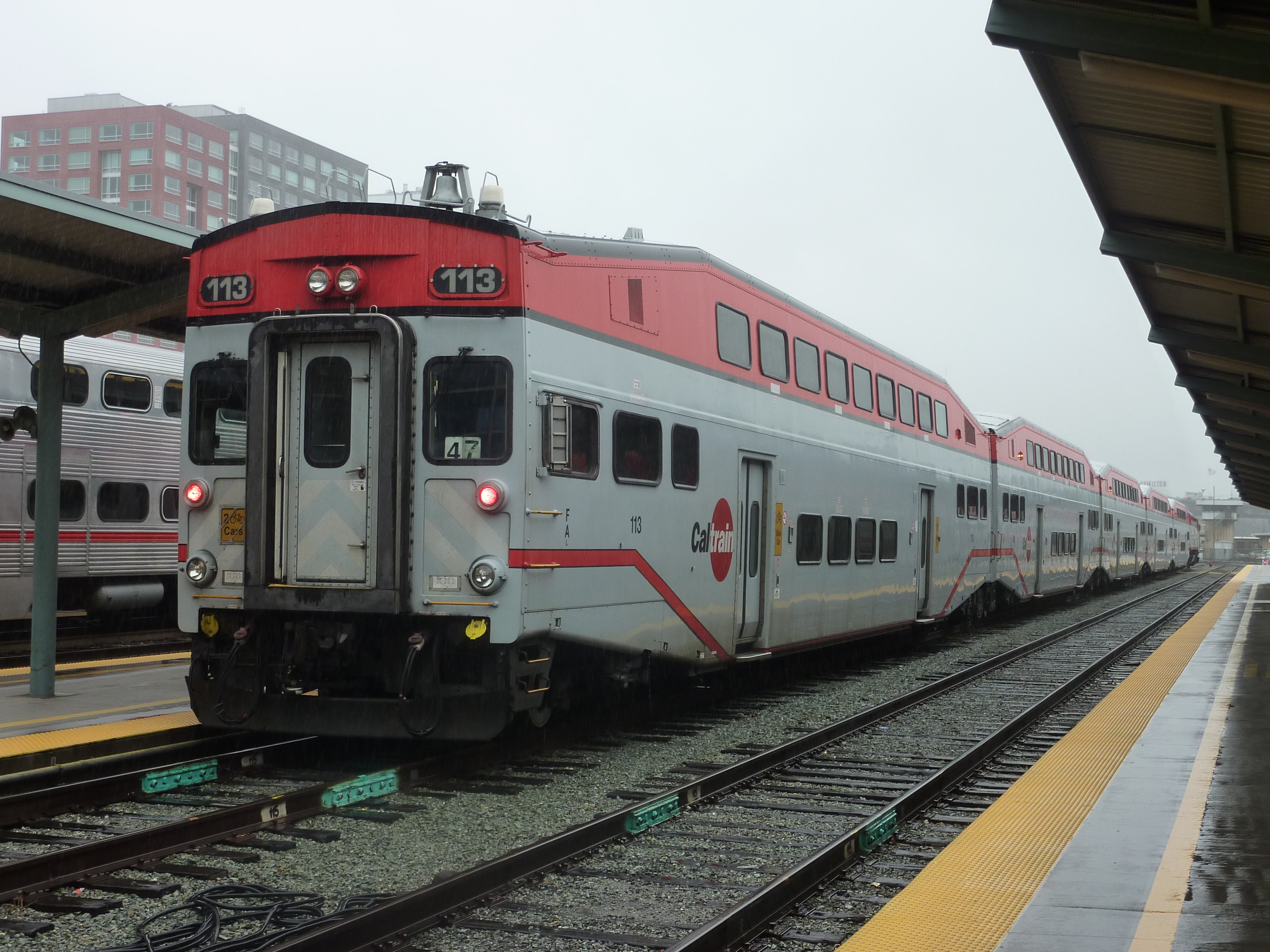 With her approval, I added a second track along the front edge of this long shelf and powered it with a Peerless Point to point DC reverse system. The new MUNI line was up and running.
Additionally, a few Cal Train Bombardier style passenger careers were acquired, and they were added to the the Giants train behind the Domed passenger cars in black and orange drag.

Three walls. Two separate point to point runs. But it seemed like it was missing... It all looked pretty cool, but at night... It just wasn't dramatic enough.  So I found some LED strip lighting with adhesive backing, and ran it along the front edge of the shelf. My initial try was a cool colored LED along the long run above the couch.  This was okay... but I knew.. the light along the shelf with my bobble heads...That had to be orange. Fortunately, Orange LED strips are pretty common.  Soon, my shelf track had some dramatic lighting effects. It was pretty cool.  But something was bugging me....
(To Be Continued)
Posted by jlassen72 at 9:50 AM No comments: